Satch Art Space is showing a selection of artworks based upon the theme of love, and sex and the the zodiac. Starting at 7 p.m., have your questions answered by ”Zodiascope,” the amazing fortune-telling game, and your future told by palm reading. Inspired by the vintage jazz album by Cannonball Adderley, “Love Sex and the Zodiac,” Satch Art Space will be playing curated cuts from Cannonball and Nat Adderley’s discography. Satch Art Space is located on the main floor of the north section of the Circle City Industrial Complex at 1125 E Brookside Avenue.  Click here for the Facebook Event Page.

Interview with Pete Brown on WFYI’s “Art of the Matter”

Recently, Pete Brown of WFYI’s Art of the Matter visited Satch Art Space for an interview about my life as an artist.  Pete also brought along his son Harold, his ace intern.  It was a pleasure and privilege to have Pete and Harold at the gallery to talk about my art and the impact of becoming an artist after twenty-seven years of being in the corporate world.  Pete is an artist that I respect and admire.  Our history goes back many years to when we were fellow artists represented by Lolly Mahaney’s gallery in Zionsville, Indiana.  Here’s a big thank you to Pete for producing such a wonderful interview!  And, be sure to check out Pete Brown’s incredible app for connecting arts organizations with interested people, Piggyback.

SATCH ART SPACE is proud to present, Sivavis: The Surreal Subconscious, an exhibition of contemporary analogue collage art.  This not to be missed exhibition is a compelling show of new work by a remarkable young emerging artist from Indianapolis.

The exhibition opens Friday, November 3, 2017 from 6 to 10 p.m. and runs through December, 2017.  And, for First Friday, Stach’s Objekts:  Bought, Bequeathed, Beloved and worthy of your home will continue.

It was wonderful to host two Blues Masters in Satch Art Space for an exceptional performance that will always be remembered and was enjoyed by all.  One special guest, documentary film maker Robert Mugge summed up the evening with this Facebook post.

Thanks to Johnny and Quiqué for sharing their art with everyone that gathered at Satch Art Space.

The exhibition that accompanied the performance was new work that was inspired by music.  This included a large painting made with acrylic and oils using text from the Johnny Burgin song, Love Me Like I Want It, from his Greetings from Greaseland album.

For additional information on Johnny and Quique, check out their websites:
http://rockinjohnnyburgin.com   http://www.quiquegomez.com 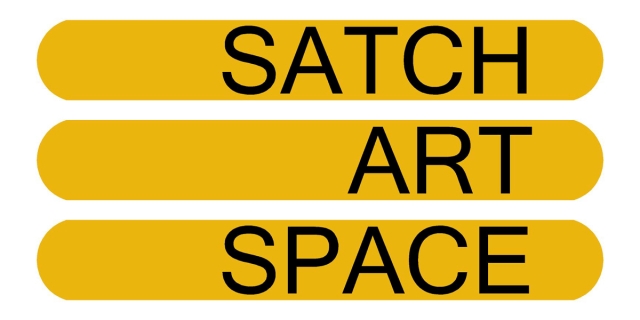 In April, I will be opening my new art space of 740 square feet on the main floor of the Circle City Industrial Complex.  To celebrate, I am hosting a reception and open house on April 7 (IDADA First Friday) from 6 p.m. to 10 p.m.  I will be showing new work and Ron Kern will be showing a selection of photographs from the series, Singular Studies from Satch’s Studio.  Music will be a curated selection of jazz performed by legendary Indianapolis musicians, including Wes Montgomery, from vinyl LPs.  Also, I will be presenting the new work of abstract landscape painter, Dave Voelpel in the adjacent Stokol Gallery.

Satch Art Space will be hosting many exhibitions and music events in the new art space. For June’s First Friday, Satch will be hosting Chicago blues great Johnny Burgin for a rare solo performance.

The Facebook event page can be found by clicking here.

I’ve been working very hard on the space and I am excited about this venture.  I hope that you can attend the reception and open house celebrating the grand opening!

For a map to get to Circle City Industrial Complex, click here.

The big new is… I am opening an expanded gallery at the Circle City Industrial Complex.  The new gallery is named, Satch Art Space.  I am planning a series of exhibitions and music events for 2017.  The first big event is March First Friday which will present the exhibition, The History of Indianapolis Punk Rock!  The exhibition presents photographs, flyers and historical information from the Indianapolis punk rock scene in the late 1970s through the 1980s in Satch Art Space and the adjacent Stokol Gallery.  The exhibition’s opening night is First Friday, March 3.  Indianapolis band, Cheetah Priest, will perform a special show.  And, a display of historic punk records and ephemera will be shown by Indiana Music and Entertainment Museum.

Making a handmade flyer to promote a punk rock band and its show was an art unto itself.  Typically, the flyers were confined to an 8 1/2″ x 11″ piece of paper to accommodate a xerox machine, which was the printer used to make copies that were pasted and stapled up all over the city.  The flyers not only included the information for the show, but also put forward the image and branding of the bands and the vibe of the punk rock movement itself.  This exhibition sets forth the unique art of the punk rock flyer and the corresponding history of Indianapolis punk rock.

The exhibition in the Stokol Gallery will be open weekdays, 9 am to 5 pm, from March 3 through March 31, 2017.  The exhibition is sponsored by Satch Art Space and Irvington Vinyl. 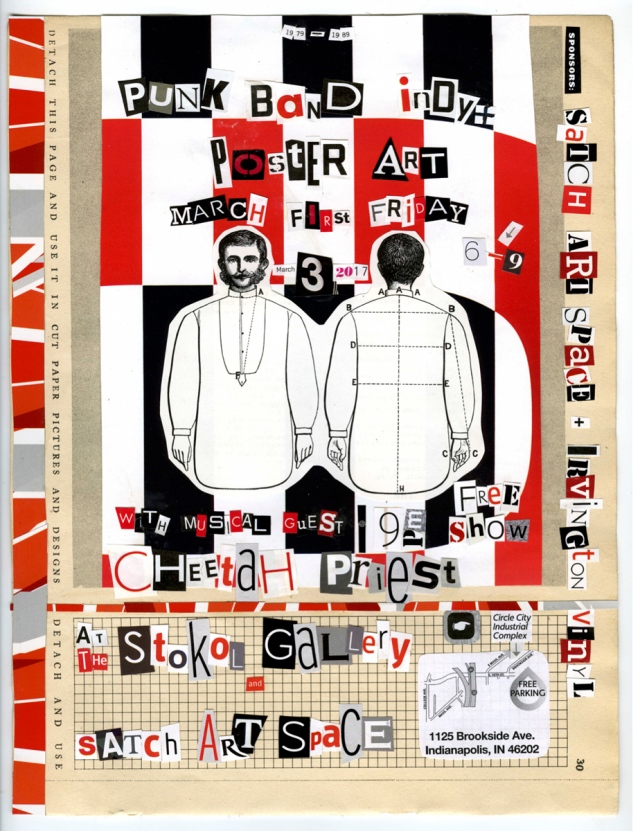 My exhibition, Body Parts, will be reinstalled and exhibited at the Schwitzer Gallery at the Circle City Industrial Complex on IDADA First Friday, September 2, 2016 from 6 to 9 p.m. 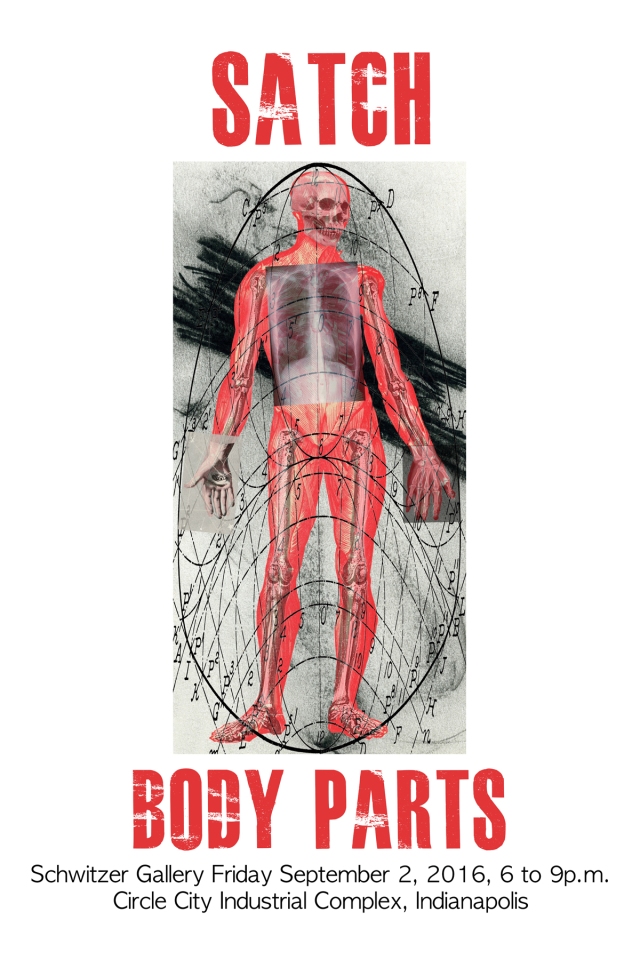